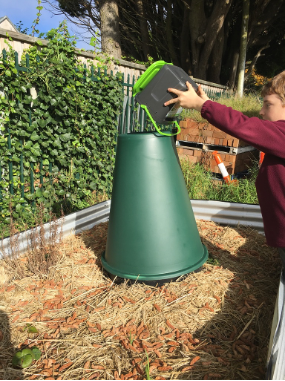 There's a war on waste happening at St Thomas Aquinas! Our school community has been recycling all of our rubbish, both after morning tea and lunchtime as well as in the classroom during wet weather.

The playground has changed too – Instead of 12 bins overflowing with rubbish each week, there are 3 stations of 3 bins and a compost caddy. The school now recycles hard plastics, paper and other mixed recyclables in the yellow bin, soft plastics in the blue bin and compost all food scraps.

A very specific and well-organised routine with a team of student bin monitors from Years 4, 5 and 6 has been established to make sure that students know exactly where to put their rubbish. It’s important to get this right, otherwise bins get contaminated with the wrong rubbish, and this interferes with how they get recycled at the recycling plant.

After every break, compost caddy monitors tip the food scraps into solar composting units in the garden beds. They are great because they take a more varied diet than regular compost systems and even though they don’t generate worms inside them, once the food breaks down to water and carbon dioxide, this rich liquid filters into the soil and creates a perfect environment for the worms to breed in.

A couple of weeks after starting the new system, Marc from the Enviromentors, a sustainability education group from Sydney, subsidised by the local Wingecarribee Council came to teach Years 3 – 6 the more intricate details of recycling. As this is a process that is new, teachers, parents and children alike are finding out new information all the time.

Marc explained the reasons for not recycling plastic cutlery, why cross-contamination can interfere with the recycling of plastics, what soft plastics are turned into and how the school could streamline their system even more over time.

One of the most exciting parts of the incursion was the final lesson when Marc helped a group of students do an audit of all of the rubbish bins. Students sorted all of the rubbish from every bin in the school into their different categories. They then counted each item and weighed each group of rubbish.

Since then, our school has received an official audit report with some very good news as well as some helpful recommendations. This is thanks to all the students and staff who have cooperated and been on board with what has been a massive shift in the school's waste management system!

A pie chart breakdown of the school's waste shows the percentage of each type of waste that is contributing to the school's overall waste. Since our war on waste began, St Thomas Aquinas has already reduced the landfill collection by half, with the landfill skip being collected once a fortnight rather than once a week. Great news for the planet! 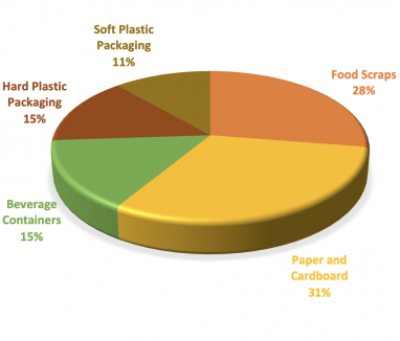